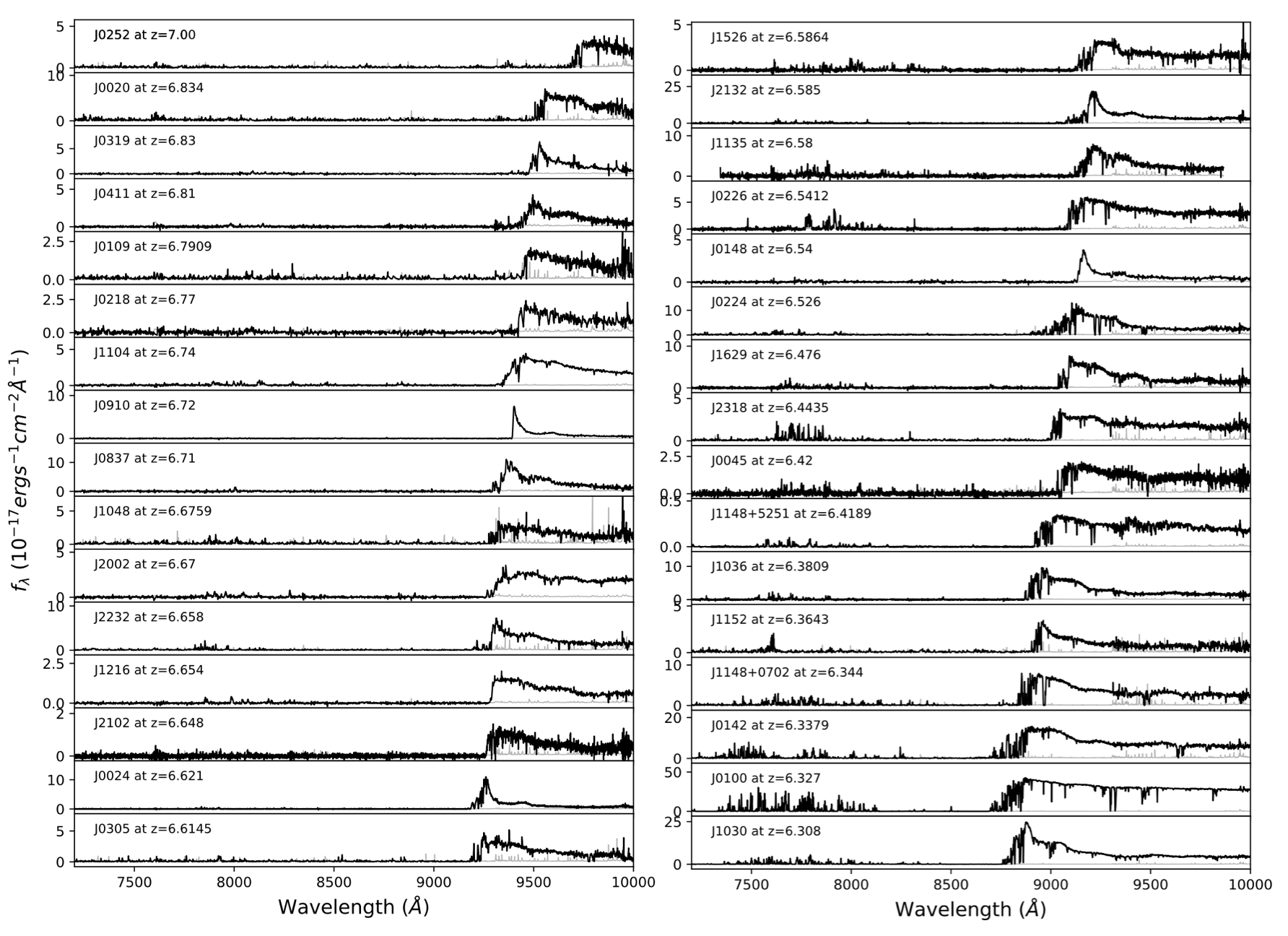 This project yeilds new measurements of the intergalactic medium (IGM) Lymanα optical depth at 5.5 < z < 6.5, using a new sample of z ≳ 6.5 quasar sightlines including 32 quasars at 6.308 ≤ z ≤ 7.00. These quasars provide an ideal sample to statistically measure the IGM evolution during the phase transition epoch. We construct a data set of deep optical spectra of these quasars, observed with VLT/X-Shooter, LBT/MODS, Keck/DEIMOS, Keck/LRIS, Gemini/GMOS, and MMT/Binospec. We first measure the Lyα effective optical depth at 5.36 < z < 6.57 from both individual sightlines and stacked spectrum. The new measurements agree with previous works and suggest the large scatter of optical depth at 5.5 < z < 6. Combined our new measurements and previous results, we obtain a best-fit of Lyα opacity evolution at z > 5.5, τ ∝ (1+z)9.3±0.6. We also estimate the Lyα opacity based on the measurements in Lyβ forests and found the result is consistent with the Lyα measurements but highly depends on the scatter of foreground Lyα opacity and the conversion between Lyβ and Lyα effective optical depth. We identify more than 400 Lyα and Lyβ transmission spikes at 5.5 < z < 6.3 from all quasar sightlines. The upper limits of Lyα opacity measured using spikes are well consistent with our best-fit opacity evolution model from Lyα optical depth measurements. The identification of transmission spikes up to redshift z=6.29 suggests that the IGM at z=6.3 is still highly ionized, while the studies based on z > 7 galaxies Lyα emissions and z> 7 quasars damping wing features suggest that IGM is still highly neutral at z ~ 7 (xHI ≳ 0.2). Therefore, the appearance of these high-z spikes means that the last change phase of reionization occurs rapidly between z = 7 and z = 6.3. The prediction of neutral hydrogen fraction from our optical depth measurements and hydrodynamical simulations with uniform UVB model suggests a ⟨xHI⟩ ≳ 10-4 at z = 6. 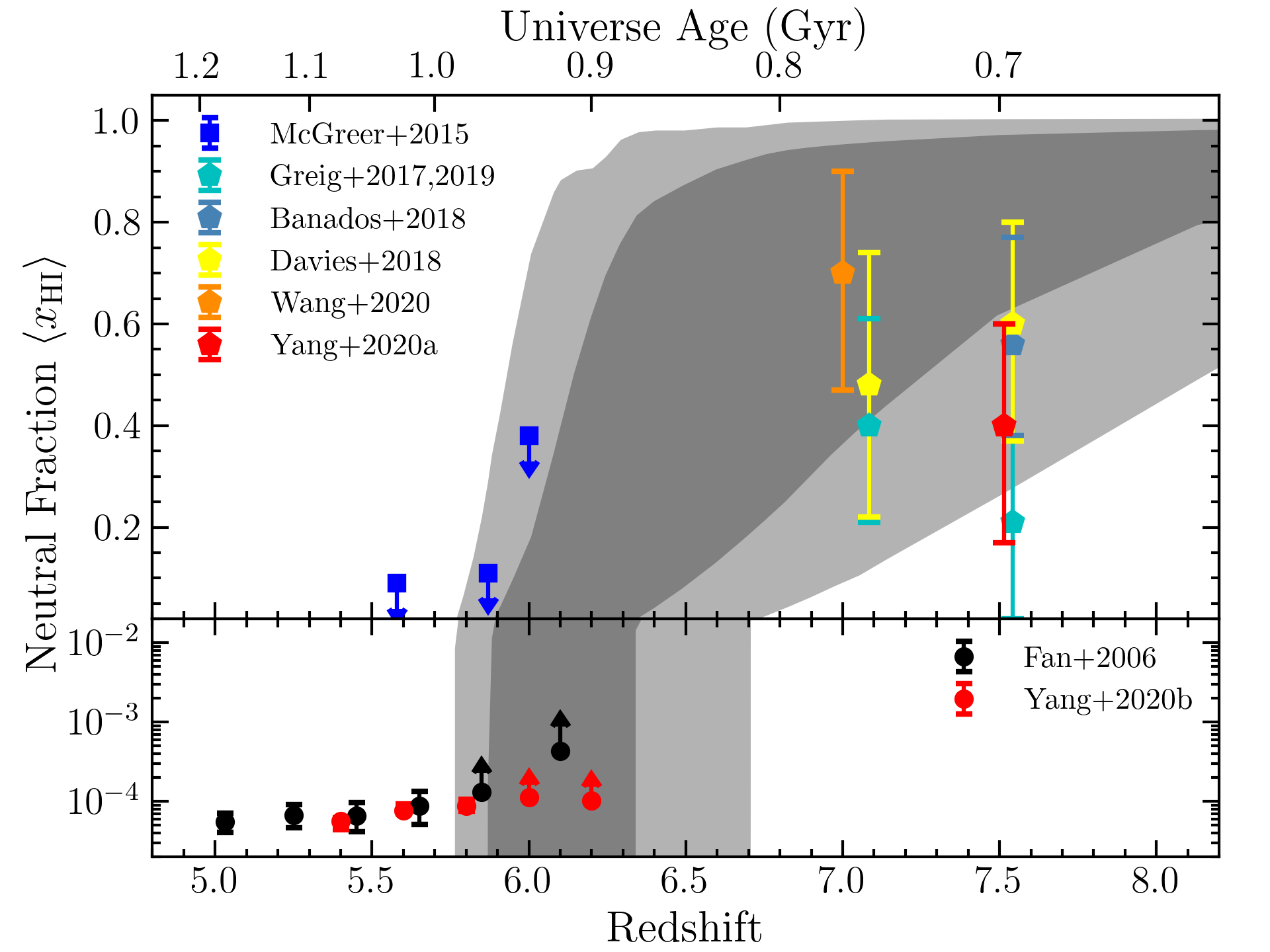 High-redshift quasars have been used to constrain the IGM neutral hydrogen fraction through different methods, effective optical depth, quasar damping wings, and 'dark pixel'. Reionization-era quasars discovered from our survey provide a valueable new sample of quasar sightlines up to z = 7.6, deep into the reionzation. Our recent works on z ~ 7.5 quasar damping wings (Wang et al. 2020; Yang et al. 2020a) and z ≳ 6 optical depth (Yang et al. 2020b) have improved the constraints on neutral fraction at z ≤ 6.1 and z ≥ 7. The measurements from quasar damping wings in our two new quasars show large scatter of ⟨xHI⟩. The analysis of the damping wing feature of the quasar J0252-0503 at z = 7.00 suggests a highly neutral IGM with ⟨xHI⟩ = 0.7 (Wang et al. 2020), while the ⟨xHI⟩ (=0.39) estimated from J1007+2115 at z=7.515 is lower than the measurements from all of the other three sightlines. Although it is difficult to draw solid conclusions because of the large uncertainties on the value of ⟨xHI⟩, the significant different damping wing features seen in these two quasars' spectra indicate a significant scatter of the IGM neutral fraction in the redshift range from z=7.5 to z=7.0, which can be interpreted as observational evidence of patchy reionization. In the redshift range of z ~ 6.1-7, the current studies have not obtained good constraints, while this redshift range is the epoch when the last transition phase of neutral hydrogen occurs. Our on-going project is desgined to investigate the IGM evolution at z ~ 6.1-7, filling the gap of ⟨xHI⟩ constraints to exactly measure the last transition of neutral hydrogen, through the Lyβ optical depth, transmission spikes, and dark pixels. Statistical study of damping wings and the measurment of quasar proximity zone size of a smaple of z ≥ 6.5 quasars will also be used to constrain the IGM evolution in this epoch.